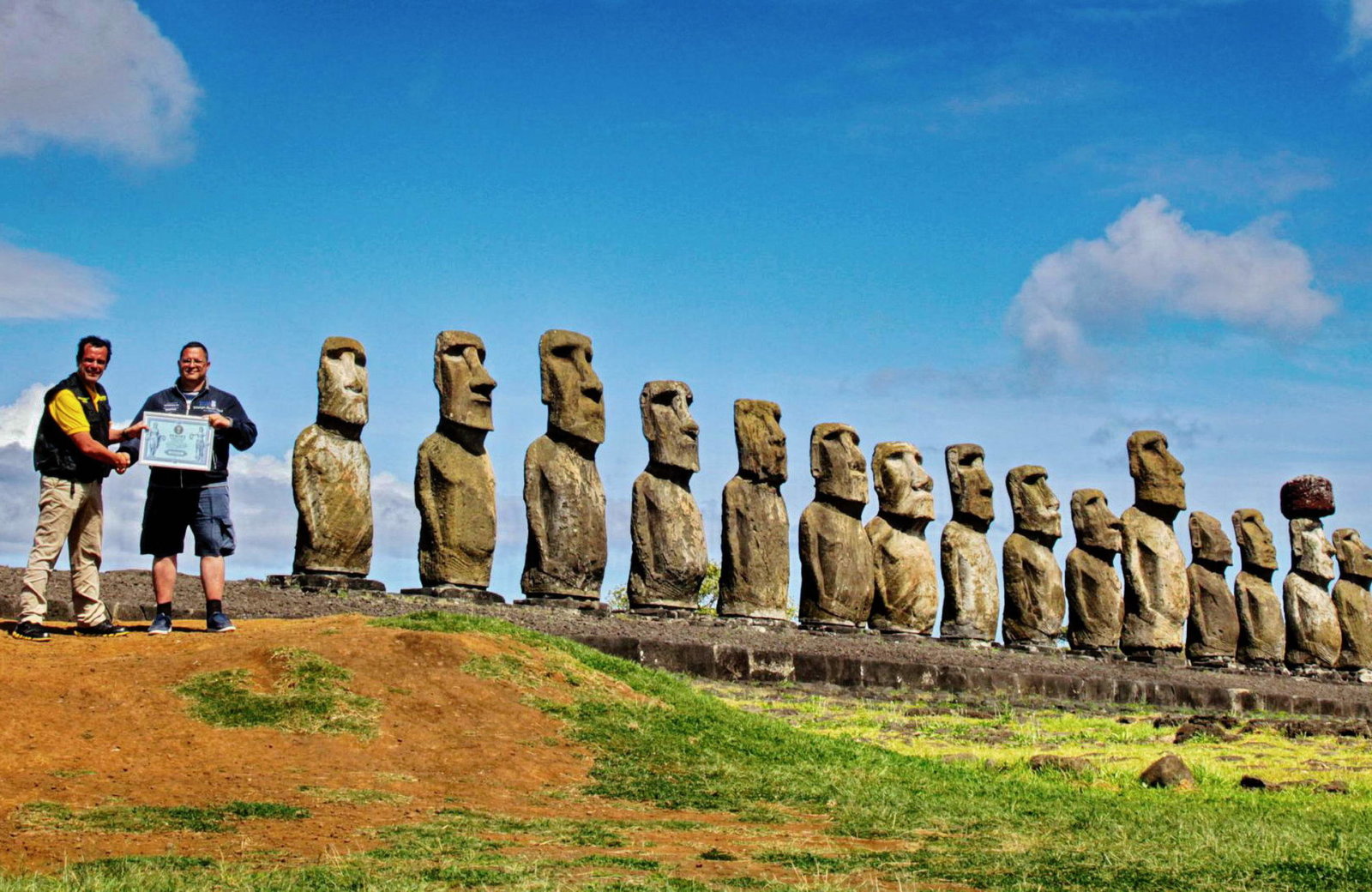 Kostiantyn Symonenko (R) receives a certificate from the National Register of Records of Ukraine for being the first Ukrainian to visit all of the world’s countries on Easter Island in Chile, on Sept. 18. (Courtesy)

As Kostiantyn Symonenko stood on a hillside on Chile’s Easter Island in late September, watching the sun set over the Pacific Ocean, he fulfilled a dream of 10 years.

The 44-year-old achieved the goal of becoming the first Ukrainian to visit every country in the world.

Since 1992, Symonenko has visited all 193 United Nations member states. His achievement was recognized by the National Register of Records of Ukraine on Sept. 18.

While having started his travels just after Ukraine became independent, Symonenko says he only made it his goal to visit all of the countries in the world in 2008. And he had always wanted Chile to be the last country he would visit.

“I imagined Chile as the last country on my list, and I had a clear picture of me standing on Easter Island during a magnificent sunset. And that’s how it actually happened,” he says.

Symonenko says he had wanted to travel since early childhood. However, he could only dream about it, as growing up in the Soviet Union international travel was almost impossible for most people — the furthest afield Soviet citizens might go was Bulgaria.

“Imagine a schoolboy from the Soviet Union, who prefers books about traveling and pirates, but realizes that he will never visit all the places described in his favorite stories, he will never see Columbia or the North Sea,” he said.

But with the sudden collapse of the Soviet Union in 1991, the state’s borders opened, and Symonenko jumped at the chance: a year later he traveled abroad for the first time, visiting Japan.

Later on, Symonenko started exploring European countries, and he lived in the United States for two years in 2000–2002, traveling all around the country and its neighboring states.

But the idea of visiting all of the countries in the world came to Symonenko only in 2008, after he had already been to nearly 50 countries.

“At some point, I realized that (traveling to all of the countries in the world) was feasible,” he says. “I didn’t know exactly how long it would take, but I decided to try, and 10 years ago I began to travel with a purpose. I created a plan and followed it.”

Symonenko says he carefully prepared for each trip, taking into account the country’s climate, political situation, and many other factors. Preparations for some trips could take up to three or four months, he said.

“It’s easy to go to European countries spontaneously, but when traveling to Africa, or to Oceania, you have to wait for a visa for up to three months, and plan all routes in advance,” Symonenko said.

However, some aspects of international travel are impossible to prepare for.

For instance, when Symonenko was in Bamako, the capital of the African country of Mali in November 2015, Islamic terrorists seized the hotel where he had been staying just a few hours after he had left the city, reportedly killing 20 people.

“It was frightening because I knew that I had just missed possibly being killed,” Symonenko says.

After a while, Symonenko stopped counting the money he spent on traveling, although he noted that his trips to Africa and New Zealand were the most expensive.

Despite New Zealand being among the most expensive countries to get to, Symonenko says he enjoyed its nature and landscapes.

“I really like New Zealand — no wonder all those famous fantasy movies have been filmed there,” Symonenko laughed.

Symonenko also compared Africa to Mars, saying that all of the African countries are completely different from the rest of the world.

In order to prove that he had visited all 193 countries in the world, Symonenko had to provide the National Register of Records of Ukraine with evidence of his journeys. So he collected together all of his boarding passes, all of his passports with their visas and stamps, and pictures of himself taken in every state he has been to.

“I handed the National Register of Records three huge folders that weighed nearly 10 kilograms, divided into sections for each country,” Symonenko said.

The National Register of Records of Ukraine checked 192 countries and decided to present Symonenko with his certificate as a record holder during his trip to the last country on his list, Chile, on Sept. 18.

Symonenko says he had had many opportunities to visit Chile before. However, his dream of visiting Easter Island at the end of his global journey had always stopped him from going there.

“Ten years ago, when I decided to visit all the countries of the world, I created a picture in my mind, in order to visualize my goal. I needed something to push me towards my dream and stop me from giving it up,” Symonenko said. 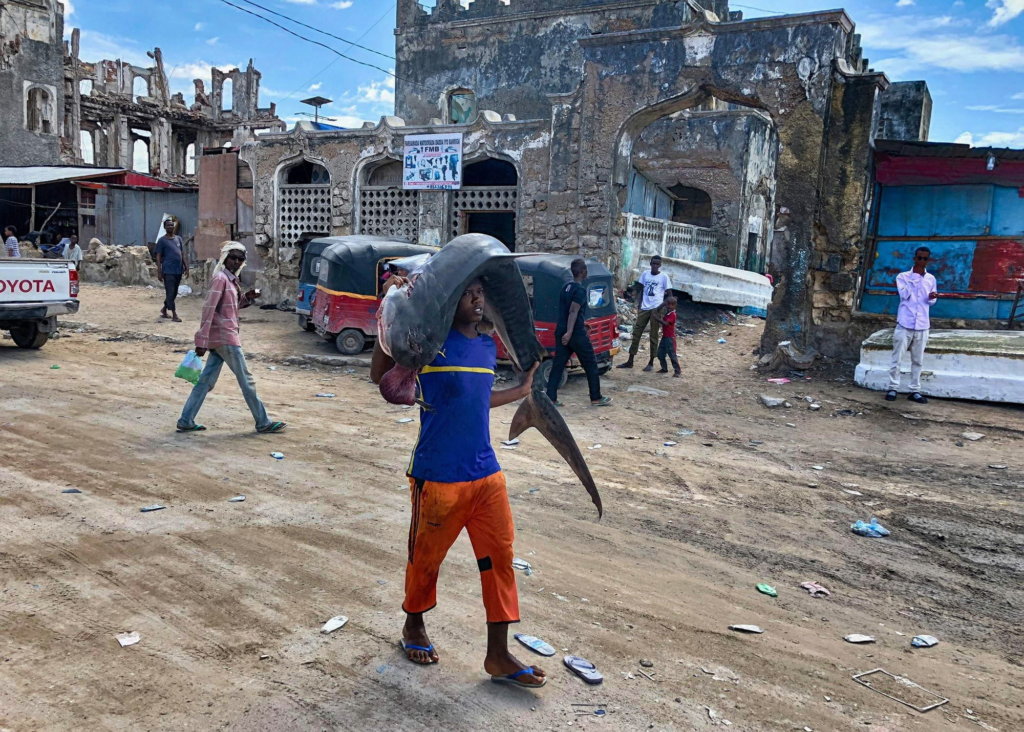 A man carries a shark to the fish market in Mogadishu, Somalia in April. (Kostiantyn Symonenko)

A father of two sons, Symonenko also co-founded a Kyiv-based law company and manages to combine fatherhood, his career, and a passion for traveling.

Even though Symonenko would spend up to three weeks away from home at a time when he was traveling around the world, he stuck to a strict rule of never missing a chance to communicate with his family.

“I have a rule to always call my family, at least once a day, and I do my best to follow it. I always call them and say that I’m fine and there’s nothing to worry about,” Symonenko said.

Now that Symonenko has visited all of the countries of the world, he has set another goal — one that is closer to home, however: He now wants to explore the various regions of Ukraine.

“I always laugh at the fact that I had to travel all around the globe to realize that life in Ukraine is not that bad. There are no tsunamis, typhoons, malaria, oppressively hot or rainy seasons. Instead, we have wonderful nature, fertile land, and a kind and cultured people,” he said.

“People usually compare life in Ukraine with that in other European countries like Germany or Switzerland, but that’s only a small part of a huge world. In comparison to other countries, we live well enough.”